I’m not sure who’s more excited.

JoeJoe, my nephew, or I?

We’re off to the Olympic Park to see the Basketball.

We headed there nice and early so that we can have lots of time to walk around the Park; immerse ourselves in the atmosphere; watch people watching sport; watch the big screens around the Park; find some lunch; spot an athlete; ooooh and just be a part of the 2012 Olympics together. 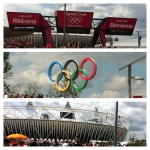 When I put in my bid for tickets for the 2012 Olympics I was determined that I should share the experience with my niece and nephew who live in England. 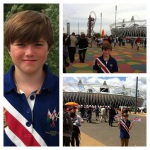 This is JoeJoe’s Olympic day with Auntie Anna. 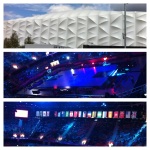 The Basketball Arena at the Olympic Park

Our first game was between Australia -v- France.  The teams were very evenly matched.  Points scored by one team and then evened up by the other within seconds.  Zinging from one end of the court to the other, back and forth.  There were shots missed by both sides and amazing shots at other times.

During the game both JoeJoe and I had questions and were unsure about the points, the scoreboard’s many numbers or the clocks around the court.   Fortunately for us (and we had both read a little about the scoring and rules of Basketball) I was sat next to an Irish chap who knew all the rules and was able to answer our questions. Phew! 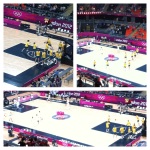 Seconds left on the clock, still incredibly close but the French were in the lead, just, 62-65 – only three points in it.  They took a shot and missed.  The ball was caught by the Australians and they moved quickly up the court… if you’re able, do have a look at the closing seconds on this BBC video.   If you’re unable to see it, let me explain.  The Australian player, Belinda Snell, took the ball and threw it from beyond the half way mark, we all held our breath for that second as it headed toward the hoop, dropping in and scoring just as the game ended… 65-65 at full time.

I only wish I’d had a camera ready to take a picture of JoeJoe’s face as he watched this few seconds from the edge of his seat.  As the ball dropped, he turned to me barely able to breathe with excitement.  The biggest grin on his face.  and said “WOW”.

Sadly, for the Australians, the extra time allowed France to recover and win the match 74-70.

The second match was between Russia and Brazil.  Again a great match with Russia winning 69-59.

Aww and bless him, the Irish chap I was sat next to, as we left told me that he was in London until next week for the Olympics so looked forward to seeing us again!  Hmmm perhaps in Ireland you bump into people but in London, during the Olympics…??  It did make me smile.

What an amazing day and experience.  As we left the Park, we walked past thousands of others looking for and enjoying their Olympic experiences.  So many dreams and aspirations.  It really was truly inspirational.

We then headed into town to Hyde Park to join my niece and sister-in-law at the London Live site watching the big screens with thousands of others.  Incredible.