Before I start this post I’m going to acknowledge how fortunate I am to have applied in three different ballots for Wimbledon tickets and to have been allocated tickets to purchase in all three!  The first of which was for two tickets to Court 2 today.

I had an ulterior motive to my rather aggressive approach to getting to Wimbledon tickets.  Many months ago I took a call from my friend Millie asking for advice.  Her daughter, Abi, had a chance, through her school, to be a ball girl but a) wasn’t sure about it; b) didn’t know much about tennis (nobody in the family plays); and c) it would be almost impossible to do the pick up and drop offs for the months of training required after school.  So I offered my ‘Auntie Anna’ services.  My job was to be at Wimbledon each week after training and to drive Abi to Clapham Junction where she would join her Dad on his commuter train home.  I have absolutely loved my weekly 15 minutes or so with Abi between Wimbledon and Clapham.

The training started in January and was intense from week 1.  My first question each week as Abi climbed in my car was ‘are you still in?’ – they whittled the numbers of ball girls/boys down each week as the competition got closer.

I may have also told pretty much anyone who’d listen that Abi was doing the training and hopefully would make it through to Wimbledon tournament.  I just may have mentioned it once or twice.

Our day today started early as Millie came up to Wimbledon with Abi.  The early start meant that there was time for us to stop off in the sunshine and have a Pimms and a good catch up!

On Court 2 we saw the following matches:

As you can see from my pictures we were also very fortunate with some perfectly positioned seats.  A wonderful day’s play on Court 2.

Every couple of hours we would sneak out to the Ball girl/boy office and check which court Abi was on.  They work one hour on court and one hour off but aren’t allowed to talk/walk or acknowledge us until their day’s work has truly finished.   Despite not being able to say hello, I think we managed to ‘stalk’ Abi on all courts with the exception of her last assignment.

I think you’ll agree from the montage of pictures below that she sure looks professional.  I’m so very proud. 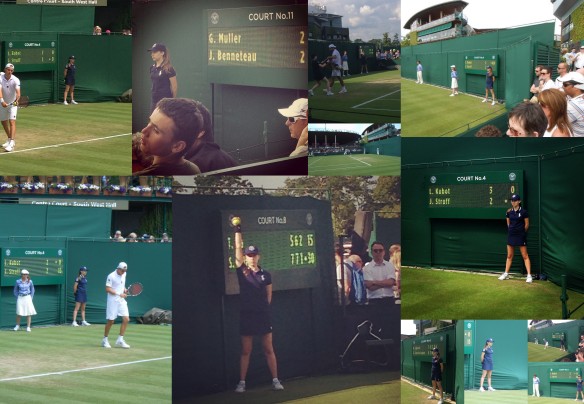 I also knew I’d done a good ‘Auntie Anna job’ when just as she headed off for home with her Mum on the train, she shook her head, laughed and told us that all she’d heard all day was Millie and I proudly ‘whispering’ about Abi or us taking pictures or videos!

She then said ‘Oooh you’re soo embarrassing’… with a big grin on her face!