A short while ago I decided it was high time I looked again at things to do in London for free or in the affordable range. It is possible!  We’re all very used to going to do what we always do, or hanging out in places that we’re used to.  It’s often only when we’ve got friends visiting us that we try somewhere new or become a tourist in our town City.  Why is this?

When I returned from Australia in 2003 I looked at London through new eyes, itme on my hands before I got a job and short of cash!  I realised that although I’d lived in London for over 12 years before I moved to Australia I’d not really ‘visited’ London for a very long time.  So before I got a job and to keep myself occupied during the days, I spent a great deal of time finding something to do every day (after applying for jobs in the morning) that would mean I spent no more than £5 a day (including travel).

OK so 13 years later I’d have to maximise £5 slightly but there’s still a heap you can do in London for next to nothing or free.  So over the coming months I’m intending to rediscover a few of them, discover some new ones and share them with you.  What have you done?  Where do you go? What’s affordable to you?

London doesn’t have to be a wildly expensive place… unless you make it that way!

So my first stop was looking at ‘being in an audience’.  I found the online links and applied to a number of shows.  I suspected that I’d maybe get one show I applied for but didn’t expect to get every single one.  So here are a few:

The Last Leg – #IsItOK
Love watching this show so it was a treat to see it being filmed.  Laughed a lot.  Loved the warmup game of ‘human tinder’ too!

Katherine Ryan – Pilot for a new show The Katherine Ryan’s Famous Celebrity Show.
Not hugely funny.  I think Katherine is a better stand up comic than a host so will be interesting to see if this show goes to air. 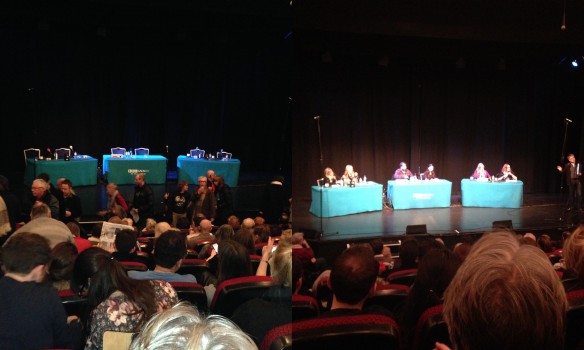 Graham Norton Show – The Eastender Special.
Great fun to watch and be a part of.  Graham Norton definitely has a great rapport with all his guests and is able to keep the ‘show going’ between takes and with slightly more difficult guests.  Very interesting to see it filmed and then watch it back on TV to see how it’s cut.

You do however have to remember that these tickets are free.  You are required (of course) to stay for the whole filming.  For the majority of the recordings you need to turn up several hours beforehand, stand in line and get a wrist band.  Usually you can then disappear for a coffee/something to eat etc and rejoin the queue shortly before being asked to file in and take your seat.  This process can take a while so be prepared to stand around for a while.

I also registered for seats at Britain’s Got Talent auditions.  I’d hoped to take my friend’s teenager during their school holidays.  Fortunately (as it turned out) they were busy on that date so a friend and I went along.  We arrived very early and anticipated a long queue.  However it turned out that people had queued over night and despite our turning up early all tickets had been allocated and we were turned away.  I can’t imagine how that would have been had I travelled up to London with teenager and then had to disappoint them with nothing.  BUT they do warn you they oversubscribe the ticket allocation so that the audience is full for filming!

Another downside is where they maybe filming two episodes on the same day but switching guests and audience between filmings.  We registered to see a new Greg Davies show being filmed in Clapham.  We were due to see the second filming of the day.  After standing in a queue for nearly 2 hours we heard that the first filming was just about to finish.  By our calculations this would mean that we’d not be seated until after 9.30pm, the filming was a couple of hours, there would inevitably be additional warm up, phaffing, retakes etc and doubted if we’d be out in time to get the last train home.  So despite being fourth from the front of the queue, chose to leave and get a late supper and head home.

So it doesn’t always go to plan.  You must however commit to attending the audience for the whole evening/allocated time, clap/laugh/boo/hiss when told and generally be fabulous TV/radio fodder for the listener/viewer.

It’s fun.  It’s great fun to see what really goes on to produce the show you’re watching/listening to.  I’d thoroughly recommend it… but allow plenty of time and remember they’re free tickets but in return for being free you’ve got to stand in line and then you’ve got a job to do!

Here’s a couple of links that you may find useful:
BBC London – http://www.bbc.co.uk/showsandtours/tickets/
ITV have a list of companies they use for their tickets – http://www.itv.com/beontv/join-the-audience
Channel 4- http://www.channel4.com/programmes/take-part/articles/all/get-tickets