I was at the funeral today of a wonderful fit young man of 88 who lived life well and taught others to live that way too.

A packed church with a spectrum of generations present. Some having travelled quite some distance to pay their respects but each of us with our own fabulous stories about him.

Growing up in a small country village with a close community means that we’re all one big family. As children we could go off on our bikes with a sandwich and 2p for a phone box. We could be gone from first light until dusk. We’d join up with other children from the valley and respective parents enroute would note when we passed or call our parents to say we’d been spotted.  It also meant that there’s not a lot that you can do without someone knowing about it!  Even at my ‘ahem’ young age, I’ve seen (and babysat) children who have now grown up to be adults with children themselves!

Despite being the sad occasion of Charlie’s passing, it was a joy to meet up with people who I’ve not seen since childhood or others that remember me as a child! One such person reminded me how proud my Father had been when I was interviewed, at the age of 15 for the BBC News in 1982 – I don’t recall it but apparently the whole valley had seen it and apparently became my Father’s ‘proud Father party-piece’ for many months afterward!

Charles Gray had lived his full life in Hambleden, as had many many Gray generations before him. His only time away had been during the war. Fortunately for us and the wider world, Charlie was persuaded to write his memories down and in 2003 a book was published “Born on Chiltern Slopes”. A fascinating book to those who know Hambleden but also those interested in a period of time and a country setting. On the back of the book is this:

“The author Charles Gray is a true countryman much loved in the village of his birth. His contribution to the community life in Hambleden has been extensive, prolonged and it continues. Although a prize winner at school he started work locally at 14 finally retiring from a company directorship at 69. All his life he has participated fully in village life, first as a young and talented sportsman, scoutmaster, then becoming president of the cricket club, chairman of he village sports club, school governor and churchwarden. After war service overseas he returned to marry the young district nurse. His entire life has been focused on the picturesque village of Hambleden set in a beautiful valley in the Chiltern Hills. In this book he reminisces affectionately over bygone times. He and his wife still lead extraordinarily active lives.” 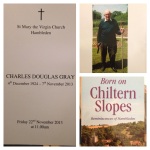 A fitting service but even more poignant was the Committal followed by the hearse being driven through the village square, over the bridge and out of the village.  The square, roadway and pathways were lined with people saying farewell as Charlie left Hambleden for the final time.

1 thought on “Farewell to Charlie Gray”