I’ll start with a warning… this post isn’t for the squeamish!

Some of you know what I did a few weekends ago.  Many of you don’t.  But all of you know that ‘The Wallace’ is always up for new adventures and trying new things!

So what did The Wallace do today? I learnt how to taxidermy a mole! Mr Mole is currently ‘setting’ and shall be introduced to you later!

Our taxidermy course, run by A Curious Invitiation, was held in a special location in Soho. Sebastian Horsley’s old flat. Despite Sebastian dying in 2010, the flat is still much the same as when he was there and still filled with his possessions, including his shampoo and half used nail polish in the bathroom cupboard!

I love this description of his flat “His flat was one of those perfect places – a tight, wooden space that oozed a sparse, bohemian danger. There was the rack of skulls on the wall, which added to that air of living on the edge.”

I understand he was a man who had three muses, all called Rachel and all were Page 3 models! Also a fan of prostitutes (and one himself for a while) he was quoted as saying “The air used to be clean and the sex used to be dirty. Now it is the other way around. Soho has lost its heart.”

So here’s the sign that used to be on the front door of his Soho flat and also the selection of human skulls! 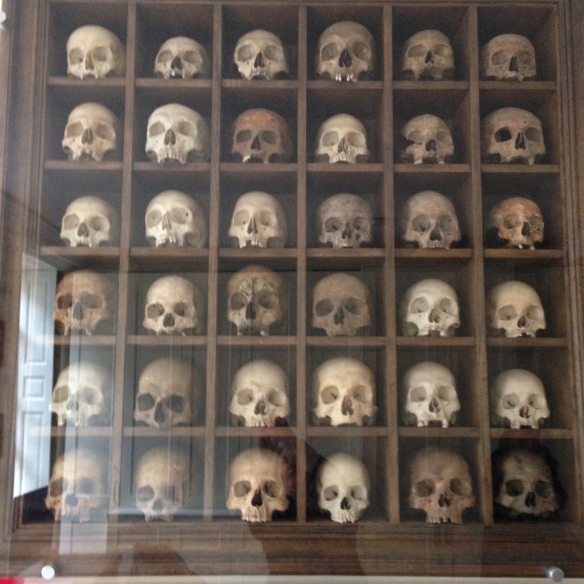 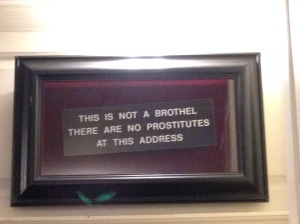 So that’s the bit even the squeamish can read and see.  Look away NOW if you’ve got this far but not really sure why!

A friend of mine loves taxidermy pieces.  I’ve never been quite sure about them but his house is full of different animals from around the world in different sizes and poses!  Odd but perhaps not as odd when you hear he’s a medic!

A while ago he asked me if I’d like to join him on a taxidermy course.  I of course said “No”  “Ewww” and such noises that were a definitely ‘you’re having a laugh’ kind of way of saying definitely not! Then he called me again to say he’d found a course and just before he books it, did I want to join him.  Ha, he knows I’m a “Yes girl” really!  I’m in, booked and going before I can think more about it.

Today was the day and I have to say I was more than a little nervous.  Not about the course particularly but more that I wasn’t sure how I’d cope and if I’d throw up!  We met early and when into Soho to do some shopping and have lunch.  I now know he was more nervous about it than I!  Both concerned that we’d best line our stomachs for an up-chunder but concerned that we didn’t want to be too full, just in case.

We nervously rang the buzzer and went up to the flat.  Greeted by a table set up for 4 novice taxidermists and a teacher with 4 shiny moles and a rat looking back at us.

During the day we chatted about life, the universe and, of course, preserving animals.  I was surprised that the teacher was a vegetarian and stressed that the reason she did taxidermy was that she wanted to preserve the animals for ever and to make them once again look beautiful.  Oddly hearing this put me at ease with what I was currently doing!

The process was actually fairly simple, not smelly and surprisingly not gross.  If you do it correctly you can cut down the mole’s tummy (carefully not removing fur) and then by gently peeling it back can remove the entire body sack of organs without anything spilling or oozing out!  I had one tiny rip but managed to contain the ‘flow’.  Biggest surprise for me was the size of Moley’s tongue (second row, third picture)!

Once the body sack had been removed, we then removed the back of the brain and the upper parts of the limbs.  Leaving the hands and feet loosely hanging on a very soft skin.

Moley then went for a bath, wash and blowdry and left to air for a short while.  Following this we carefully applied preserving liquid and borax powder. 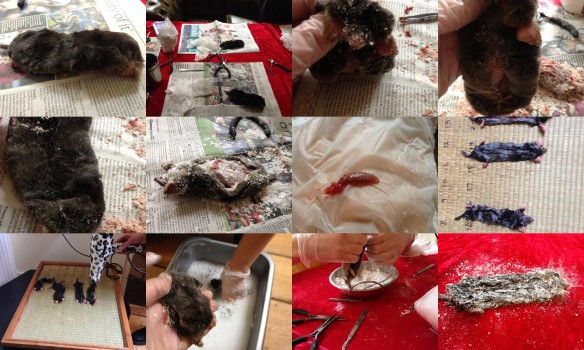 The next step was stuffing the little chap and wiring his now saggy body.  We places wires into the arms and legs and through the hands and feet.  We then wrapped another wire with cotton wool and wrapped that in yarn – this should be the size of the body cavity.  Tying carefully the ‘limb’ wire to the body wool and then packing the remaining cavity carefully with more cotton wool.

Then a touch of sewing to stitch Moley’s tummy up.  A little squeezing to ensure the cotton wool is packed in all the right places so he looks beautiful again.

Home with moley.  He still had protruding metal from each hand and foot and was a little dusty with the borax powder.  You position the taxidermy mole in the way you want him to ‘set’ and leave to dry for approximately 5 days.

Once set, you clip off the wire and give him a brush carefully with a toothbrush (preferably not one you’ll be using again!).

And meet Mr Moley… yes I did make him some specs as he wanted to see who was visiting him!

Despite my initial reservations about doing any sort of taxidermy, I really enjoyed the day.  Mr Moley looks fabulous, his shiny coat and plump little body give the impression he could still be alive!

It’s not something that I feel I need to do again….  but then never say never again!