Yesterday I had a follow-up appointment with the dermatology hospital specialist to see how the nuclear levels of drugs were working on my auto-immune disease, Lichen Planus.

I was a little sheepish when I went into the consulting room because I didn’t complete the whole drug regimen prescribed.  I know.  Do as I say, not as I do.  I began by explaining why I stopped.  At first he looked at me as if to ask if I didn’t believe he was the expert in the room, but then he smiled and told me he’d have done the same if experiencing the same side affects!

So what side affects was I experiencing (and that I haven’t told you about!), some of the worst were visual migraines which would come on quickly and mean that I couldn’t see properly, certainly couldn’t see any written word or computer and even when it came on when I was playing tennis, I’d mistake flashes of white migraine for the ball (most amusing to watch not to experience)!  I also had horrible pulsing pain in temples.  A lot of stomach cramps.  Nails crumbled if I touched anything.  Vomiting in the night.  Weird dream/nightmares that were totally vivid and technicolour.  Odd ‘away with the fairies’ feeling where I’m in the room but everyone around me is underwater.  And those are just a few of them as well as not a great head space and a lot of tears.

He was, given the above, pretty impressed that I’d managed to keep going with them for as long as I had.  We then moved on to examining the lesions.

Really pleased with the nuclear drug regimen.  For the most part I’m now left with ‘burn-out’ scarring on my wrists, torso, belly, thighs, armpits and feet.  Some of these areas have faded already but he told me that the scars sometimes don’t go for many many years and in some cases, never.  I’m not sure any of you will be seeing me in a swimsuit for a long time!  (**collective sigh of relief**)

The disease is still active in me though.  I have a new lesion on the palm of my hand and more on my feet again.  He’s recommended that I continue with the steroid creams on my hand and feet and monitor the situation.

The other area of concern was in my throat.  He examined my mouth and said he couldn’t see any lesions so the drugs had worked there too.  However the ‘piece of bread’ that I can feel stuck in my throat may not indeed be a lesion at all.  He believes it’s too far down my throat to be LP as it usually doesn’t go farther than the back of the mouth.  He thought that this may be damage from the drugs or a tear in my throat that perhaps has been exacerbated by the vomiting whilst taking the drugs.  He said he wasn’t too concerned but that I should keep an eye on it.  It may well heal itself in time and now that I’m not taking the drugs nor having the side affects it may heal faster.  My call.  If I’m worried about it and it continues to remain then he said I should go back to the GP and ask to be referred to an Ear, Nose & Throat specialist.  I’m happy to wait and am sure he’s right.  It’ll heal in time.

He was super pleased with the progress.  He was very impressed with my NHS GPs who’d prescribed early the nuclear level of drugs and said that he’d never seen an improvement of this level given the severity and extent that the Lichen Planus has spread.  He said usually he’d expect to be seeing me for many more months/years before seeing this sort of improvement.

I know from the Lichen Planus Support Group that I’ve joined on Facebook, and which has been a huge support in understanding this disease, that my recovery is incredible.  There are people in the group who literally have been fighting this for 10+ years with no remission.  Others for whom recurrences are regular.  So maybe my own immune system isn’t as knackered as it would appear.  Maybe I’ve been able to clear some of it up without the drugs.  I’ve been juicing lots of good immunity fruit and veg and even found an company (Botanic Labs) where I purchased 3 days of immunity shots.  I don’t know if this all made a difference but I certainly felt better for them all.  I just wish I’d be able to afford to continue with 3 days of shots every couple of weeks.

I know I’m not out of the woods yet.  I am however much better than I was.  I have a bathroom full of nuclear drugs.  I have access to a supportive specialist and a wonderful GP practice.

So for now, I’ll be applying steroid cream to my hand and feet.. the best way I know to make it work at super strength is to wrap in clingfilm and allow to fully soak in.  So this is me today. 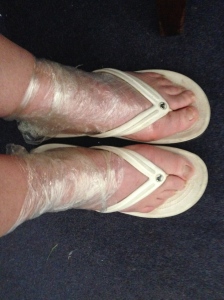 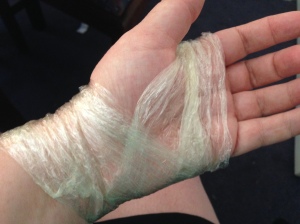